Ornaments in the Tree Review Game

For a few months, I had been reading about this game called Ghosts in the Graveyard, which is a math review game that has went around the Math Twitter Blogosphere. I first heard about it from Sarah Carter's blog (which is a must read), and she posted the link to the original game. I had seen others talk about playing, and I had an epiphany (if you could call it that) to do something similar. With this being December, I though that Ornaments in the Tree might be a great idea. I had seen other variations, depending on the time of year, such as Turkeys in the Oven, Snowflakes in the Sky, etc...from other great minds in the MTBoS.

So, after school I drew Christmas trees (which are probably some of my better artwork to be honest, sadly) and put them on the whiteboards (VNPS) in the classroom. I also used some chart paper.

Here were the rules and procedures I established. Also, I created a recording sheet, which you can find here. Two of my classes really enjoyed it, but one class I had a few behavior issues out of, so I might have to restructure. One tip I would suggest is that when you calculate points at the end, do it yourself. I think I had a couple of students try to move some of their ornaments (and a couple of kids accused each other of cheating).

Anyways, here's how I did it.

I cut up some questions, and I randomly gave to students. Students got unlimited tries on a question. When they got the question correct, I gave them an ornament to hang on a tree of their choice. I made it clear at the beginning of the game that the points will be determined at the end. When I did this part, I made sure I did it with my back to the board so no one would accuse me of cheating (yes, this has happened before with other games).

I found some questions on systems of equations (which was the unit we were on and just finished), cut them up and used those as my questions. I also found some ornament clip art, and made a sheet (which you can find here) and cut them up. I made about 20 copies of this,  and this was enough for three classes (around 90 kids).

The only issues I had were some kids not wanting to work or wanting to give up on problems. I might restructure it differently, but if you have ideas, let me know. 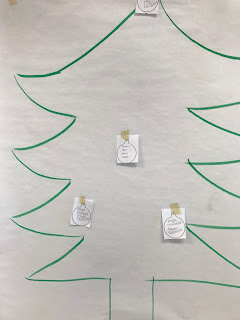 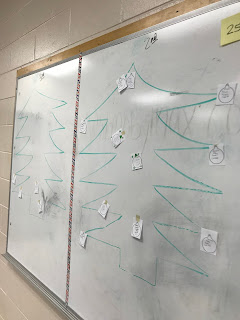 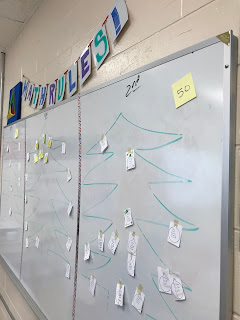