Where do I even begin? I had the incredible opportunity to attend the 2016 Desmos Pre-Conference at Augsburg College in Minneapolis last Friday, July 15. There was so much rich information that I need to reflect on what all I learned, but let me just share a bit at first. When the conference began, I was intimidated because I only knew one or two people in the room, but I calmed down once I saw free Einstein Bros. Bagels! I wound up meeting several people throughout the course of the day, which helped me to calm down. But, let's talk about the learning. 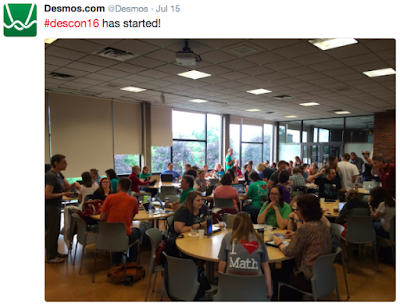 Dan Meyer was our special guest, and he helped us kick things off, starting off with a video recording message from Eli, the founder of Desmos. Then we were introduced to Voice Over, which is this awesome new feature that has been recently revealed by Desmos, which is an adaptive tool for students who are visually impaired. It helps students type in equations, and students are even able to "hear" the graphs being graphed out. Everyone in the session was amazed by this. We also heard from Michael Fenton from Desmos, and I even chatted with him for a few minutes.

We were divided into groups, and I went to the intermediate group. We worked with others, and I finally learned how to do regressions, thanks to help from Joel Bezaire (@joelbezaire) and Hedge (@approx_normal). There were so many more things we learned, but some of it was a review. I also learned how to create lists, (which are evidently a thing in Desmos). I helped my group make folders and text notes, so I was glad to help out and contribute something.

After a nice pizza lunch, we heard from Sara VanDerWerf, who is the president of the Minnesota Council of Teachers of Mathematics, (MCTM),  who talked about how powerful of a tool Desmos is as well as how to be an "evangelist" for Desmos and math education. She also discussed how we as educators and a society have much work to do to make sure that our our minority students achieve as equally as Caucasian students. Although my students are Caucasian, it saddens me that we have so much educational inequality in this country.

After lunch, Christopher Danielson took us through Activity Builder, which is another awesome Desmos tool that can be used to engage students. We also learned how to do...wait for it...card sorts, which is a newly released tool for teachers to create card sorts instead of having to use paper and do it all by hand. I created a Card Sort on Arithmetic, Geometric, or Neither, where students have to clarify sequences by one of the three. Feel free to use and check it out! Also, Thanks to Julie Reulbach (@jreulbach), there is a spreadsheet on Card Sorts for teachers to use. Here is the link to the spreadsheet.

I learned a ton from the conference, but I forgot to mention the coolest parts..Free Desmos socks AND meeting Dan Meyer (along with his awesome selfie skills)!!! 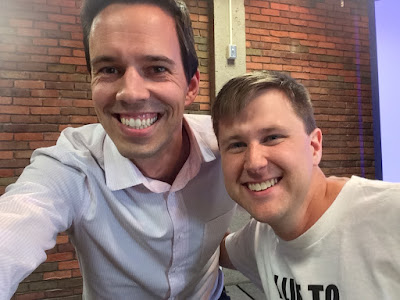