After seeing several posts from others out in the Math Twitter Blogosphere about doing student surveys, I decided to give it a go myself. I rushed to the library to book the computer lab. To my surprise, it was open the next day. I looked at a survey from Julie Reulbach, and I created my own survey using her questions.

Before going to the lab, I instructed students to be honest with me and assured them that the survey was anonymous. I was really interested in seeing the data so that way I could help improve myself as a teacher and prepare future students for my classes. The data showed that most students thought I was understanding, graded fairly, wanted them to succeed, and explained the topic clearly. So, I was somewhat content with that. I had an outlier on the lowest end, but I still respect their opinion nonetheless.

I asked students what I could do to explain topics more clearly. Several students suggested more games, projects, and hands on activities, with which I definitely agree. A few students said to spend more time on concepts. I agree with this, however, the state standards make that very difficult due to the volume of standards and the lack of time. Many of the students rated me a 3,4, or 5 on having interesting lessons, and my data was somewhat normally distributed on the challenge level of the class. I also asked students what they could've done to be more prepared for this class, and some said doing a review of Algebra I before diving into Algebra II, and several said "nothing."

Quite a few of the students said that I should keep letting students play trashketball, keep my positive and engaging attitude, and keep being a savage (which is evidently a compliment). Students said that I need to slow down (with which I agree), give more free time (definitely not agreed), and playing more trashketball. Several students suggested that I assign less homework, even though I might assign 10 problems per week at most outside of class. Some suggested more free time, although I said that nor extra credit were options I was willing to start doing. Students said I needed to stop being so uptight, to stop apologizing for everything, and "letting turds talk a lot."

Now, its time for the moment you have all been waiting for, from the mouths of teenagers themselves. Take it away, kids.

What should I stop doing?

How would you describe this class?

What advice would you give to future students? 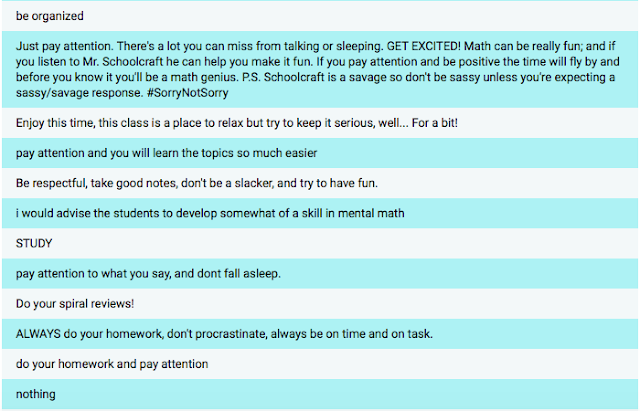 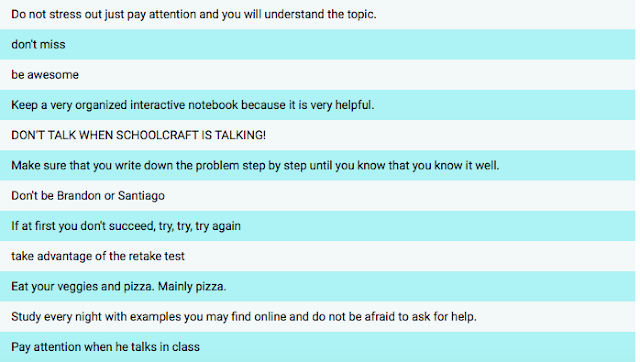 What is one word you would use to describe this class? 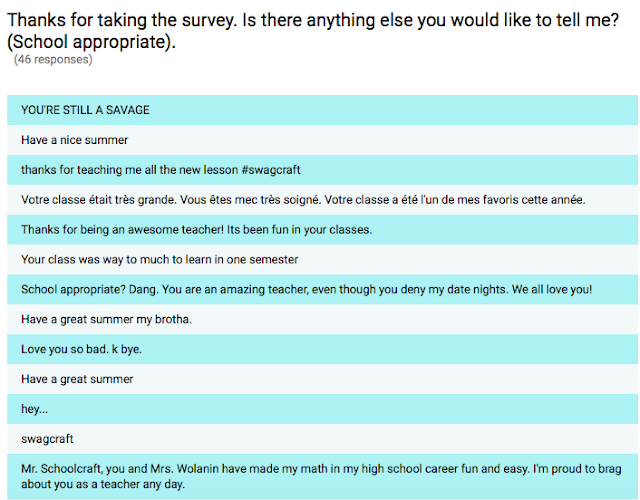 -For those of you who do not know, Alex is my girlfriend, and my students (for some reason) are obsessed with my personal life.  It's amusing nonetheless.


Hope you have enjoyed!