Yesterday, during my 2nd block class, we were discussing polynomial graphs. I had an activity pulled up on the Promethean board from Desmos Activity Builder on graphs of polynomials. We had discussed the concept of end behavior of polynomial graphs on Friday. I told my kids that end behavior would be an abstract concept, but students were able to make the connection between graphs and end behavior as we were doing the Desmos activity. However, this brought up a whole other discussion on the concept of negative infinity.

A student asked what the concept of negative infinity was and how it was concrete. At first, I described it in the form of debt. I said "If I owed you $20, then I would be $20 in the hole. This student was still not confident with the topic. He wasn't for sure why it existed and wondered why we didn't just use zero. After taking a couple of minutes and listening to student input, I suggested that I put this up and get some suggestions from the MTBoS. As always, the MTBoS delivered!

First, I want to give shout outs to Jim Doherty (@mrdardy), Stronger Math (@sneffleupagus), Susan Russo (@Dsrussosusan), and David Griswold (@DavidGriswoldHH) for their input and suggestions. I will let the tweets speak for themselves. 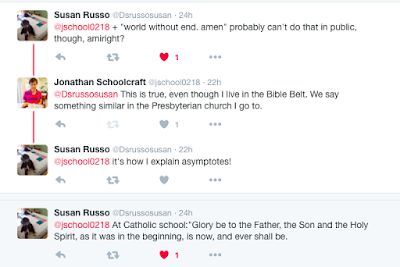 I went back to class today and brought back the info that the MTBoS provided. This still was proving to be a struggle. One of my students described it in terms of borrowing on a house. For example,  if you borrow $50k on a house, you are in the hole $50k. Then I described negative infinity as a bottomless pit. This still didn't work. The student wasn't for sure why we just don't use zero. I really had no words, and neither did the class.

I thought it was a legitimate question, and I was very proud of the input and engagement that the students gave to the topic. I was impressed with their reasoning as well. However, I would love some of your input as well!! Feel free to share, comment, etc.
at March 01, 2016