After returning from Fall Break, I decided to do exponential growth and decay, and I think that most of the kids enjoyed it. I really like this lesson as it is one of the most relevant and "real-life applicable" lessons of Algebra 2.

I started out the lesson by doing the Desmos Activity "Ben and Abe's Repair Shop", which you can search for at teacher.desmos.com. I really liked this lesson, and I really liked students' reactions to the scenario. Students were getting into the discussion and were fully engaged. However, I still have some troubles getting all of my students to effectively communicate. We are working on that, though. After this activity was done, I asked students if they liked the show The Walking Dead. I then asked students if they wondered why I was talking about The Walking Dead. We modeled our own "zombie apocalypse." It started that I was the first infected zombie; then I infected someone else. Then the two of us infected one person each, and so on, and so on.

After this, I put a picture of the 2016 NCAA March Madness basketball tournament bracket. I had a couple of students who were able to identify the bracket, but most couldn't, unfortunately. Then we looked at a few equations to model growth and decay. End Day 1.

We went full force on some word problems. Of course, there were a few groans, but a decent portion of the kids understood how to construct the problems, but some of them had issues converting percentages into decimals in the formulas. There were also some issues with being able to differentiate between 4% and .04%, which I tried to fix in one of my classes, but I didn't do such a good job in my other class. After tackling some word problems, we did Exponential Growth and Decay Modeling using M&Ms.

I first found this activity from a Google Search and found a handout. At the current moment, I cannot find the specific handout, but I don't want to take credit for something that I did not do. I have used the particular handout several times, but I tweaked it to include some technology.

The directions are on the handout, but some kids had some trouble at first getting started with the growth and/or decay. I had to help a couple of groups individually. I began the activity by having students line up at the front of the room by birthday January to December, and then I grouped the kids. After completing seven trials, students had to plot their data into Desmos and look at their graphs. I required students to call me over to debrief when the graphs were constructed, and we discussed the graphs as a group. I then had students answer a couple of questions on the handout.

If you would like, here is the handout. If you have any questions, feel free to contact me!

Here are a few pics! 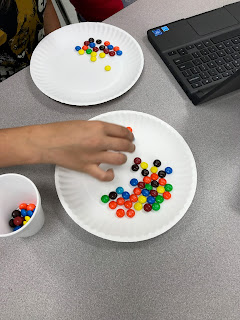 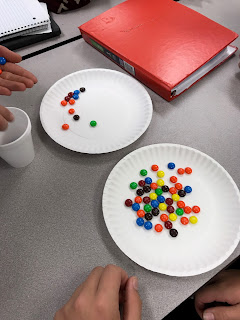 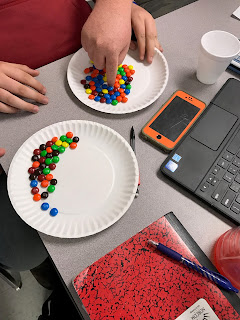 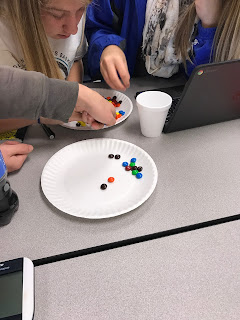 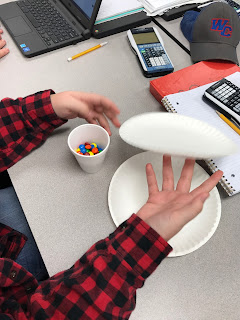 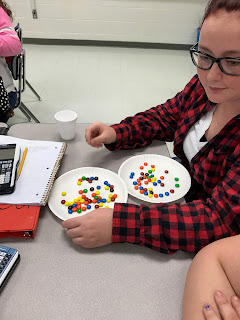 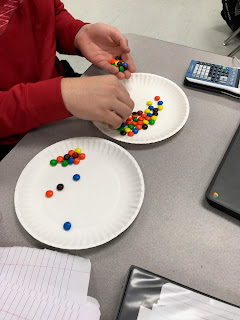 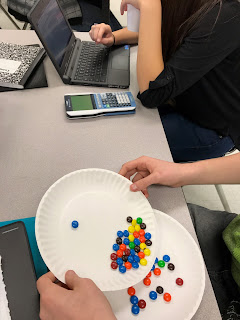