The Day the Local News Came to My Classroom

On Tuesday, my kids and I had an interesting surprise. I had went to the office to sign out to run an errand during lunch when the technology coach was there. She was telling me that Channel 6 News in Knoxville was coming to interview a couple of teachers about the Chromebook project that we have implemented this year as well as how broadband internet has helped our rural community. She said that the principal had lined up two teachers to speak. We spoke for a moment, and then I went to go run my errand. I got back, and she was still there waiting on the news to arrive at the school. We chatted again for a few moments, and I returned to my classroom. About ten minutes after we returned from lunch, the principal knocks on my door and says that they want a math teacher. The teacher next door also teaches math and is related to the principal. The other math teacher and I said that we would both participate in the interview together. Then I broke the news to the kids.

"Hey guys, Channel 6 in Knoxville is coming into our classroom. We might have to change a couple of our plans, but be sure you are working on something."

The reporter came in and introduced himself as well as his cameraman. I knew who the reporter was since he had been on Knoxville local news ever since I was a kid. I introduced myself, and then he asked what class this was and what grade level. They hooked me up to a microphone, and the cameraman got a few shots of me walking around the room assisting kids as well as a couple of shots while I was "teaching" using the Promethean board and technology.

Then the reporter asked me several questions about Chromebooks and how broadband internet has affected and helped my job as a teacher and how its affected student learning and outcomes. Then he asked the class if a couple of students wanted to be interviewed, and I had two volunteer immediately! They were hooked up to a microphone and were asked how the broadband internet has helped affect their learning positively.

By the time all this had happened, class was over, and we even had to go over a minute. The next day, I told students that since we had visitors observing Chromebooks on Friday and the local news came unexpectedly to our classroom, that I would bring them a treat. So, my girlfriend and I are going to make cupcakes for the kids for me to bring on Monday. 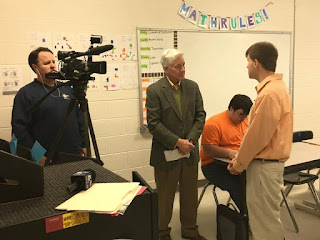 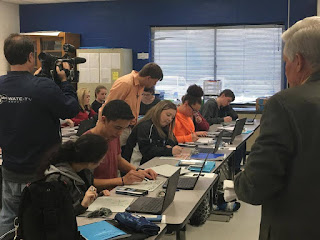